It was a historic day at Shelter Hope Pet Shop on Monday, as volunteers from partner “KHTS Adopt a Pet” gathered to celebrate 1,000 adoptions since the rescue first opened in 2015.

A pair of 13-week-old kittens named Bear and Scout marked the rescue’s 999th and 1,000th adoptions by a family in Santa Clarita, who were surprised by balloons, an angel wing mural and a group enthusiastic volunteers when they arrived to fill out the adoption papers.

The Morrell family with Bear and Scout.

“The fact that they’ve had 1,000 adoptions almost makes me cry,” said Leeann Morrell, Bear and Scout new mom and repeat adopter from Shelter Hope Pet Shop Santa Clarita. “The good they’ve done for animals is just amazing, and being a part of it is just super cool.”

After recently losing their family cat to a coyote, the Morrells decided to return to Shelter Hope to adopt a needy cat and fell in love with Bear.

But when they realized his brother, Scout, would be alone for the first time, the family decided to temporarily place him in foster care to ease their transition.

“About 45 minutes after I got it, I went out and said to my husband, ‘We have two new cats,’” Morrell said with a laugh. “We couldn’t separate them. They were like peas in a pod. 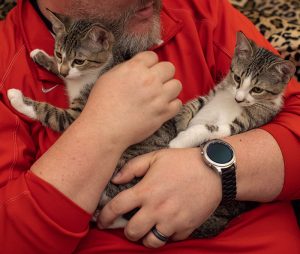 Bear and Boy Scout held by their new father.

Dani Caouette, owner of Shelter Hope, called the celebration of 1,000 adoptions surreal, adding that it is her dedicated team of volunteers who have made it happen over the past four years.

“I know I could never have done this without all of my teammates here,” she said. “It’s a team project from start to finish.

Caouette continued, “We all work so hard every day – we do it 24/7 – and it’s when we get an adoption and I see my volunteers see that final link that makes it worth it. . a little bit of hard work that we’ve put into this area. That’s why we do what we do every day is see them get their homes.

About the Adopt a Pet Series from KHTS

Once a month, the KHTS Adopt a pet The series features an adoptable animal from the Santa Clarita Valley in need of a home. The KHTS Features team travel to different shelters and shelters in Santa Clarita to meet the animals and tell their stories in hopes of helping them get adopted. First launched in August 2016, the series has partnered with seven local rescues, as well as the Castaic Animal Shelter, to feature more than 100 dogs, cats and rabbits, and has seen 96 adoptions – and more – so far. ‘now. The series was created by Melissa Lampert-Abramovich, who has over 10 years of experience in the animal rescue world and co-founded Madeline’s Angels Pet Sanctuary in Santa Clarita in 2016..

KHTS Adopt a pet brought to you by:

See the complete collection of KHTS Stories and Videos on hometownstation.com here.